"The Creation of Adam" by Michelangelo, created at the height of the Renaissance in 1512

The Renaissance was the zenith of human creative output. In the 15th and 16th centuries, a cultural movement swept across Europe, reinventing art and fashion, architecture and literature, science and music. New innovations unlocked unexpected forms of expression: ideas spread rapidly with the invention of the printing press, while the discovery of perspective in oil painting allowed artists to capture the world with new vividness.

We're now entering a second Renaissance—a digital Renaissance. Innovations are once again reshaping society and culture. Software is making it easy for anyone to create; internet platforms are opening the floodgates of distribution; and cultural and generational shifts are reworking the economic relationship between creator and patron.

Since our first creator-led investments over a decade ago — in the early days of Etsy and Soundcloud — we've watched the creator economy emerge through the lens of the entrepreneurs and makers we work with –- many of whom will be coming together at our forthcoming Creator Summit. Last year, Roblox paid out hundreds of millions to developers, many of them teenagers. Patreon has paid out over $1 billion to creators since its launch. We've seen millions of people connect with creators and communities on Discord, and millions more use Linktree to refashion their digital identities. More recently, we've seen the bricks being laid for the metaverse: through Rec Room and Gather, we've watched as people create and connect in immersive virtual spaces.

Last year, Roblox paid out hundreds of millions to its network of game developers

What's striking about the creator phenomenon is that it isn't a vertical trend; rather, it's a through-line that cuts across social, gaming, crypto, media, commerce. It is both the future of work, with creators forming a new class of digitally-native entrepreneurs, and the future of leisure. And while the creator phenomenon is often thought of as a consumer trend, it encompasses both enterprise and consumer. At Index, we've seen Figma—an enterprise software company—equip everyone with the tools to be a designer. Notion has cultivated a vibrant community of creators, many of whom earn a living building and monetizing apps on Notion. The creator phenomenon avoids simple categorization; no industry will go untouched.

We think of the creator phenomenon in three parts: (1) creation tools, (2) distribution, and (3) monetization. In other words: how creators make stuff, how creators reach an audience, and how creators get paid. This triad forms the bedrock for this new economy.

We think of the creator phenomenon in three parts: (1) creation tools, (2) distribution, and (3) monetization. In other words: how creators make stuff, how creators reach an audience, and how creators get paid. This triad forms the bedrock for this new economy.

The first piece of the puzzle is democratizing creation itself. The best tools broaden the scope of who can be a creator: for example, Figma and Canva for design; Kapwing and Veed for video; Descript and Splice for audio; Unity and Unreal Engine for gaming. Elegant, design-first tools unlock new levels of self-expression. They make being a creator more accessible than ever.

The internet unlocks distribution. Traditionally, gatekeepers dictated who had influence: record labels, newspaper editors, studio executives. Now anyone can build an online community. You can share videos to YouTube, writing to Substack, music to Soundcloud. On the internet, nothing is too niche; there are communities for everything and everyone. We've watched as Discord has swelled to millions of active servers—each the living, breathing nucleus of a community.

The final and most recent piece of the creator triad is monetization. Being a creator is hard and often unforgiving work. One study found that reaching the top 3.5% of YouTube channels—which means about 1 million views each month—only nets you $12,000 to $16,000 a year, around the U.S. federal poverty line.

It was this problem that inspired Jack Conte and Sam Yam to found Patreon. Jack, a musician struggling to earn a living, saw the need for a more direct relationship between artist and patron. He and Sam built Patreon in that vision. Jack may have been the first person we heard use the word "creator", way back when we met him in 2012. And Jack was prescient again last year, when he was among the first to proclaim this second Renaissance.

Jack Conte, one half of the band Pomplamoose alongside his wife Nataly, was inspired to found Patreon after struggling to earn a living as an artist.

We've seen other innovative companies pioneer ways for creators to earn income. Printify and Etsy make it easy for anyone to launch their own custom products, while Creative Juice is becoming the financial hub through which creators run their businesses. The rise of crypto means that a creator can sell her digital goods on OpenSea, or display them on Showtime. Groundbreaking innovations like non-fungible tokens (NFTs), social tokens, and decentralized autonomous organizations (DAOs) will further push forward the monetization layer of this new economy.

Some rare companies innovate on all three sides of the creator triad, crossing creation tools, distribution and monetization: Roblox, for example, provides accessible tools in Roblox Studio; allows developers to have their experiences discovered by the community; and shares earnings with developers via the virtual currency Robux, which underpins a robust digital economy.

There's an oft-cited survey from 2017 that revealed that most kids want to grow up to be creators: being a "YouTuber" is twice as desired among kids as being a pop star or movie star. In all the hand-wringing that followed this survey, what was missed is that "creativity" was the kids’ most-cited reason for wanting to be a creator, far ahead of "money" or "fame". Creators won't crowd out other forms of work; we'll still have doctors, teachers, engineers. But every person will now be able to amplify knowledge, cultivate community, and earn income on the internet.

The creator economy is accelerating, propelled by both the shock of the Covid-19 pandemic and the coming-of-age of Gen Z. Being a creator is about flexibility, self-expression, and financial upside. It's about side-stepping the gatekeepers who have historically captured value and moved culture. It's a new form of entrepreneurship, one built for the digital species we are becoming.

Join us on 21 October 2021 for our Creator Summit and hear directly from many of the companies mentioned in the story. 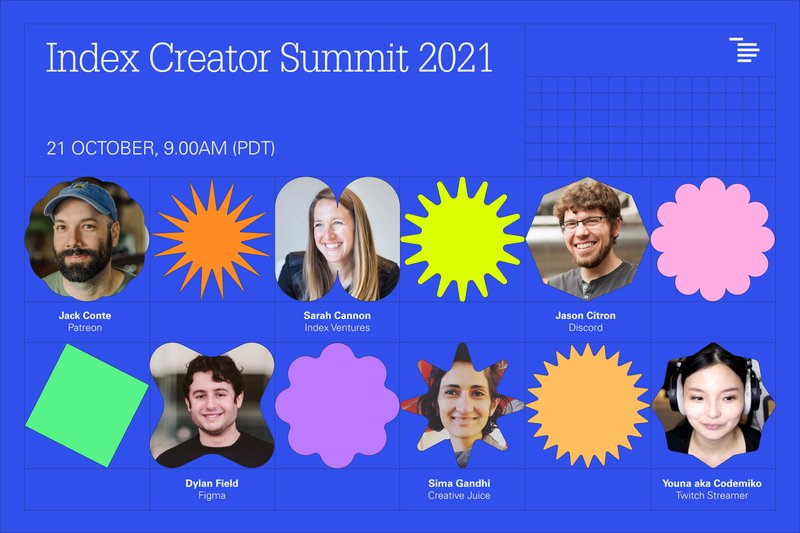